After a grumble-rumble sort of gray rainy season day, the heavens let loose about 9 p.m. EDT last night… and continued until well after 1:00 a.m., when I briefly woke up to the repeated flashes of nearby lightning.  Then this morning, the clouds parted, so I decided to venture out on a bird walk.

Feeling better than I have for nearly two weeks, I walked around the nearby pond across Hagen Ranch Road and then headed to Green Cay, once again.  There were even fewer birds out, probably due to all the crash / bang of the night before, but what I saw made for everything…

I was over half way around the boardwalk without seeing much when I spotted what appeared to be a Roseate Spoonbill nearby, perching on the railing.  I stopped and watched the bird.  It was startled by another walker and flew off… but even closer to me. Still perching on the railing, it seemed to be peering down below… perhaps surveying likely fishing grounds?  No, I spied another flash of even brighter pink below and heard a kind of cooing sound coming from a male Roseate.  It was a pair, a mated pair.  The male was communicating with his lady love by lifting his beak and making a little sound in her direction.  Then he flew up towards her.  In a flutter of wings, she flew off, with him in pursuit.  Mating ritual?  I don’t know, but it was quite touching to see.  They are beautiful, if unusual birds with their odd long spoon-like bill and pink feathers.  The female was just a touch lighter in coloration, even looking a little on the violet side depending on the lighting, while the male was quite striking in his bright pink plumage. His bright pink feathers would be the envy of any princess-loving little girl.

The next two birds that I saw weren’t mates or even the same species, but both successful fisher birds in their own right, a Cormorant and an Anhinga.  Oddly enough, they were perched side by side on the railing, so I was able to get contrast photos of the pair.  I noticed that both fisher birds had sharp hooked bills to aid in catching their prey, mostly minnows.

The rain held off and I got in a splendid if soggy walk.  I was very pleased.  Here are more shots of the birds seen today: 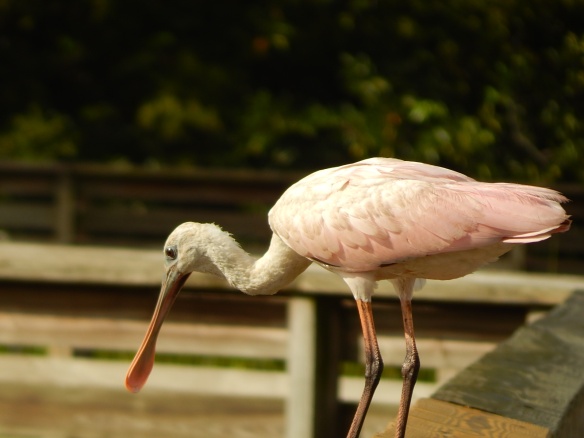 Another view of Cormorant

The cormorant tend to dive into the water, while the anhinga cruises through the water with its long snake extending above the surface like a submarine periscope.  The anhinga then slips below the water and swims swiftly after its prey.

The next amusing thing I saw was a couple of marsh hens taking on a much larger Great Egret.  The marsh hens, probably the most homely of birds are wonderful parents and watch over their growing brood quite fiercely, even shooing off the offending egret with an aggressive display of combined wing fluffing and hooting.

And there was my walk today.  No gators until I dropped by for the first time the Nature Center.  Three baby gators were on display, perhaps to prevent them from being carried away by a hawk?

It felt good to be outside and wasn’t too hot due to the massing clouds blocking much of the intense South Florida sun.

Enjoy your day and upcoming weekend!