Another week, another adventure.  The day started out with my intention of finding the Wellington Environmental Center, but I got put off by a dusty dirt road with huge dump trucks roaring down it towards me.  The Center is located on the western edge of Wellington and on the verge of “civilization”, at least what passes for it in South Florida.  I usually have an alternative in mind before setting out, so I ended up at Okeeheelee County Park, off of Forest Hill Blvd. in Palm Beach, Florida.

This park is divided into south and northern units, divided in half by Forest Hill, a super busy right-away that takes carries vehicles east and west between Wellington and Palm Beach, etc.  Once you know the main streets in this area, it is fairly easy to get around, but the traffic is sometimes extremely thick.  This is me talking after having lived in a rather quiet town in Southeast Washington State, where twenty cars together constituted a traffic jam.  Palm Beach County is heavily populated even sans its temporary snow bird population who have mostly departed the area now as “season” has ended.

The southern half of the park is a bit rough around the edges in places.  There is a huge equestrian center on the western portion, plus horse trails galore.  Newer hiking and biking trails are also being constructed, along with periodic benches for sitting and admiring the developing view.  From my brief exposure to this place, it looks like a huge project is underway.  Lakes have been dredged and wetlands planted to encourage wild flora and fauna.  I noted several plant species that I grew familiar with further north in Palm Coast / Flagler County present in this new park, including Beauty Bush, Red Bay, Slash Pine and others.  There were plenty of Northern Mockingbirds present, all singing their melodies, as well as Grackles and Red-winged Blackbirds.  I only noted a few of the larger wading birds, a couple of Egrets and one Great Blue Heron, and one lone Anhinga, a swimming fisher bird.  One of the park personnel said he spotted a Bald Eagle, but I didn’t see or hear it.

Next visit to this particular park, I plan to visit the more “civilized” portion of the park, on the northern side of Forest Hill.  There are fishing and swimming opportunities, playgrounds, paved paths, exercise stations and plenty of biking trails. 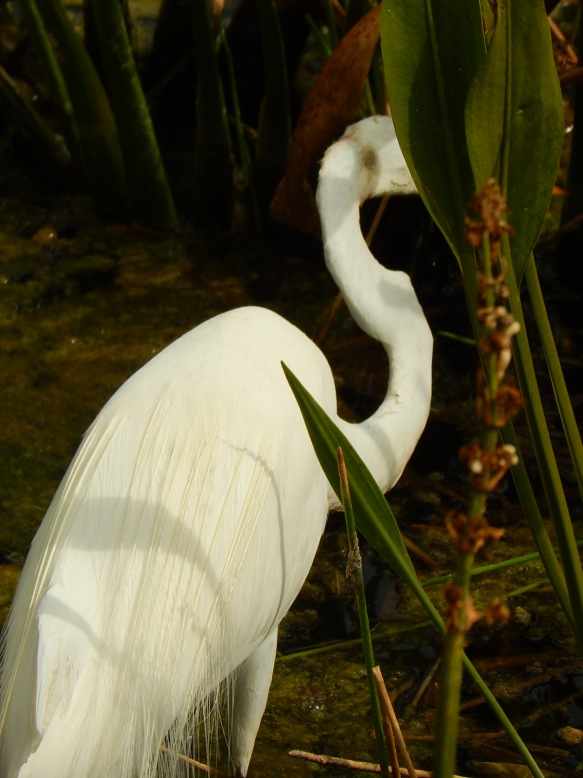 On Tuesday, I visited Green Cay Wetlands and managed to see some birds and two alligators.  I didn’t get a good shot of the largest alligator, but watched along side a large group of elementary school children as a big turtle seemed destined to become lunch for the gator.  At the last minute, the turtle finally detected the presence of the huge sleeping beast, turned around and submerged safely under the duckweed covered waters.  Such drama!  The kids were delighted that the turtle had escaped and so was I.  Another highlight of this little outing was spotting two perched Roseate Spoonbills, a relatively rare bird indeed.  They are related to the Ibis family who are far more common in Florida. 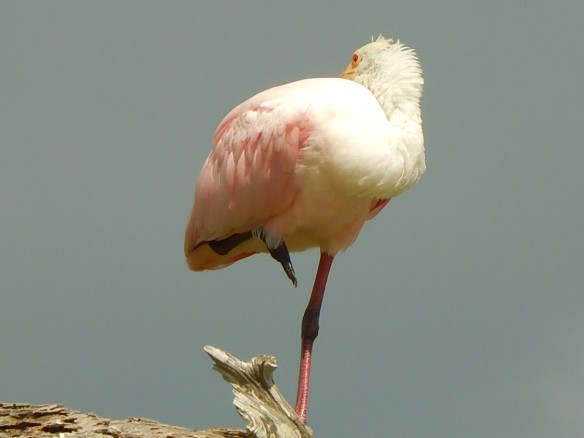 This last bird is the Tri-colored Heron, a little smaller with white belly and neck.  The bird in the opening photo is a Green Heron, which has a short tail and aggravated intense look.

Perhaps due to the large bird population present in some of the areas where I walk, I seem to be becoming a “birder”.  I won’t ever be quite as competitive as some birders can get or as patient to stand, listen and watch for long periods of time in order to identify the creatures.  I simply enjoy being out, exploring and learning about the natural environment.  Except for a few park employees, I was alone on my hike in Okeeheelee. The more popular Green Cay always has numerous walkers, strollers, photographers and just plain tourists, plus the odd school group.  It’s nice to have some variety available even in this populated area. 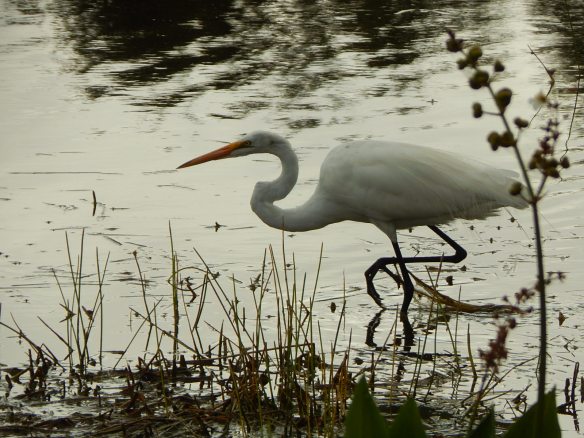 Reporting from South Florida, I’ll check in next time I have something interesting to post.