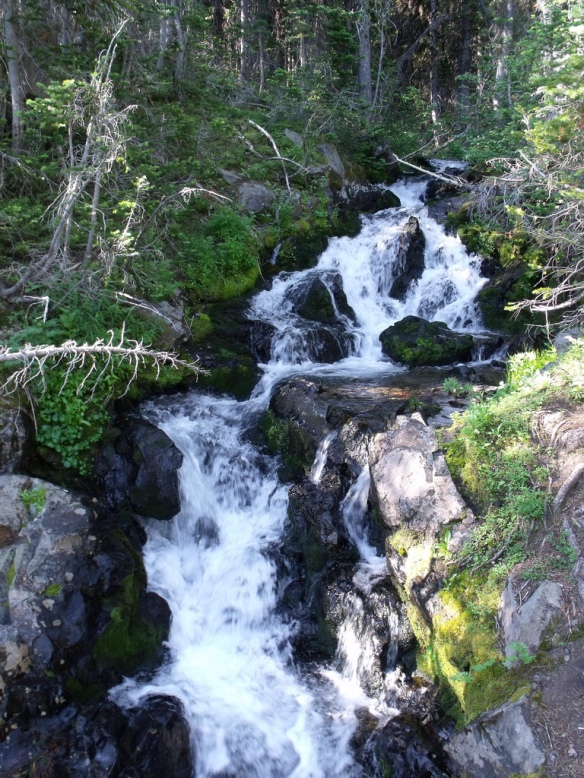 “When an inner situation is not made conscious, it appears outside as fate.” Carl Jung

We’re already feeling the effects from the upcoming partial solar eclipse in Virgo. This past week, there has been a lot of “drama” at the prison where I work. Due to privacy concerns, I won’t go into particulars, but accidents, health issues and interpersonal relationships seem to be highlighted right now.

Yesterday, I had a little incident where I left the lights on in the car after driving in to work. When I prepared to leave, I discovered… whoops! No start-up!  Since I have an older car, I carry a set of jumper cables in the car, from my days of parking in isolated trail head parking lots. Better to be prepared than not, I always say, and good thing, as none of the officers in Visiting / Staff Entrance had any cables in their vehicles. One of the officers came out to assist. I already had the hood open and the cables out. I was on my way in short order and took a little drive to ensure that the battery would be regenerated for an early morning start-up. Worked fine.  Of course, other folks are having to deal with far more intense incidents, circumstances, flood, fire, health, financial issues and the like.  My little blip is hardly worth mentioning save that everything that occurs in our life is symbolic to some inner state of being.  So… I’m turning the engine over with new energy, new purpose?

Last night I had some difficulty sleeping (one of those insomniac bouts that occasionally happen) and when I woke up, felt a ton of pent-up emotional energy and memories surging into the open. After reading a piece about the upcoming eclipse (see: https://wordpress.com/read/post/feed/22012016/803700848) I realized that I was responding, in part, to the intensified energies of the Virgo influence, leading to a kind of purging of old memories, emotions and whatever else no longer serves.

I found myself thinking about the pathology of my birth family. There’s no other way to put it. When I was a child, it seemed like a normal family, but as I grew older cracks, fissures and hidden fault lines began to appear. Many a light worker can share stories of their dysfunctional families. I’ve shared my story about my father and myself on this blog. There is also a story about my two sisters and many cousins. Briefly, I was apparently written off several years ago and am in touch with only one cousin, who regularly sends me cards for Christmas and Valentine’s Day.

While at one point, I thought that I shared some common interests with my younger sister, she basically turned her back on me some ten years ago, after I told her that I would no longer financially support her with periodic infusions into her checking account. I couldn’t afford it. The money from the small inheritance I received from my parents as a result of my taking care of them in their final years was all but spent. To realize that I was being used was upsetting at the time and we have had no further contact to this day.  Same with the older sister, who blamed me for taking sides with my parents when all I was trying to do was to take care of them in their growing mutual infirmary and final years.  Neither sister did anything to assist me with the family issues, so the old energies of betrayal and abandonment occasionally reveal themselves to me as I am ready to clear them.

I have forgiven my father. It has taken longer to forgive my sisters. Obviously these were karmic relationships and it’s time to completely allow for the dissolving of the related emotions, thought-forms and memories.

Betrayal; it is a word that has powerful emotions and imagery behind it, yet it is something that all of us, at least in the old energies, have had to contend with in one shape or another. Whether small betrayals or large ones, we have had to come to grips with the fact that we create these “outside” manifestations in order to be able to purge the related energies from our bodies, minds and hearts, both on an individual and collective basis. Now is not the time to continue to hold others to blame for what is occurring in our lives. The past is done. The Now moment is staring us in the face and nothing that had anything to do with these old memories exists in front of us. Clinging to the old just holds us back and prevents us from successfully surfing and flowing with the cosmic energies that are arriving daily upon our planet, in successive waves.

So… by the afternoon, I am feeling much better about myself and my ability to move through whatever this new moon and solar eclipse will present to me. We have all been given the tools. Now is the time to use them.

I just started nibbling away at “21st Century Superhuman: Quantum Lifestyle” by Cary Ellis with Teddie Mulder. In this book, there are ideas about how to learn to flow with the energies rather than to resist and continue to re-create blockages. Cary has done a tremendous amount of research in order to write this book, but beyond that she lives the Quantum lifestyle every day.

These ladies do not present their information to gather followers or start new religions. They are intent in living in the new energy and being authentic in every way. These ladies serve as gatekeepers and wayshowers and have gone on before even many of the light workers, light holders and light servers. We are all at different stages of moving into the new energy. There is no need to compare yourself with others, just realize that you have opportunities to expand and move beyond those things, those beliefs and constraints that you thought were obstacles. And it can be done with ease and grace… once you understand the basic laws that underscore the workings of the Universe.

I know that I’ve held within some resistance in moving fully into the new energies. Part of that stems from the fact that I’m still working in a dense 3D environment and its related energies. It is a choice. Yet, instead of becoming depressed about the situation, I do have the opportunity to work on a lesser scale to release the energies that I can work with, knowing full well that I am still adding to the light quotient of the planet by doing so.

First of all we are individuals and responsible for our own lives. Letting go of the shame, blame, associated anger and grief, resentments, jealousies and other fear-based emotions and reactive energies is the place to start, if you haven’t done so already.

And even though I’ve been on the path and awake for many years, I can’t say that I’ve fully committed like some to living beyond the boundaries of the 3D lifestyle. It’s enticing and to some degree, terrifying. Are you appalled at my honesty? Don’t be. As we all go through these different levels of upgrades there is more to release, more to discover that has been hidden from your awareness perhaps for even thousands of years.

Remember that while certain events that seem related to these energies have occurred in this lifetime, the base energies from which the manifestations have emerged can be very ancient indeed. The events that play out in this lifetime serve as reminders that you can now do something about releasing the old energies from your mental, emotional and physical bodies. You can rewrite the script of what is to become your life from this moment on.

I am grateful for the opportunity to share some of my experiences, observations and insights that emerge along this journey. I hope that others will take heart and remember my words when they are down. I’ve been there with you and together we can rise into the light of the morning as it dawns fresh upon this beautiful home world of ours.