Even the best laid plans sometimes go awry…no message for today. Yesterday, I underwent yet another initiation of sorts and am now integrating more “parts” of Self into my physical being. Translation: the mental body is off-line right now so other parts can get “acquainted” with each other.

It is almost like waking up and seeing a world through different eyes or not quite knowing what to do with those things called “feet”. I remember just such an occasion when at three years old, I suddenly “woke up” and was standing in front of the bathroom basin with a toothbrush in my hands. I didn’t know my name or where I was; simply I was a girl and apparently trying to brush my teeth. I went out and mixed with the people that appeared to be family and finally learned my name, “Elizabeth”. Weird sensation, but similar. I suspect those who feel they are walk-ins have experienced similar happenings.

Still, getting used to being in a physical body is a bit of a stretch for a light being, awkward and heavy, so today I feel rather tired, but will adapt in time to the sensation.

I took a walk yesterday, and took snapshots of spring blossoms, with which to decorate the blog in coming days and months. It is a fresh spring day outside, warmish, with deep blue skies and towering fluffy white clouds, but haven’t brought myself to go out in it.

Instead I watched a series on the life of Restoration women, during the time of Charles II of Great Britain. Being a descendant of Puritans, it was interesting to watch a short bit of the history of those brilliant and tempestuous times when the modern era began, with commerce, science and politics. Women were involved in a way that they had never been before and still 350+ years later are still working to overcome the artificial barriers placed on their sex by male-dominated society.

Yesterday, I read Metratron’s message about Divine Solitude with great interest, as it seems that I have decided, as a soul and now as soul-infused personality, just such an experience. As a woman brought up in a conservative household, I was expected to get a job, but primarily to get married and raise children. I did get the job. I even got the husband, but married a man unable to have children. Then, when the husband refused to accept my desire to grow and experiment in spiritual matters, I got rid of him and left. I have remained unmarried for over 20 years. At first I looked for another but could not find any one of corresponding resonance.

As I have developed in my own manner and on my own path, I most recently recognized that I needed to work on myself rather than looking to another to “complete” me. So this is what I have been doing, following intuitive direction and coming to a point of finally reconnecting on a conscious level with my mentors and guides. The process still continues and I experience plateaus and high moments, as well as the occasional low ones, such as last week in its entirety apart from the moments spent on the teleconference calls and immersed in the high energies.

There will be a time when I can fully immerse myself in the bliss, but now I still work in the world, although I am certainly not of it. I am very different from the individuals that I work with and encounter throughout the day, including the offenders. It is not to say that I am a superior being, not so, for that would suggest that somehow I am judging them as inferior. Not so. Let it be said that I understand them in a way that would not occur to them, yet, since most have not woken up, and when they do, they will see differently from me, because they, too, are a unique facet of the God Force. So, I look upon them with compassion… that is, except during the occasional moments of frustration when I feel I’m dealing with the completely obtuse and confused, mostly referring to the strange workings of bureaucracy and State government.

So, apparently I planned this adventure, to live many years on my own and at 60+ am not longer attractive physically to males, so am free to pursue my own direction without interference. I’ve become a crone, that mystifying age that so terrified men (and still does) when a woman begins to feel sovereign and independent of men, when she can become her self, and enjoy her own company without pleasing anyone but herself. It sounds selfish, but indeed I live simply and relish time alone, spent in solitude or near enough (I have two cats) resting on the weekends regenerating and relaxing before entering the fray once again on Monday morning early, very early.

This period has also been one where I have grown closer to my Soul, my Christic Self, who I regard as my Twin Flame. I know with great surety that my Twin is NOT physically present in this world and this also serves to free me from the desire to find him amongst all the men or women (!) of the world. Yes, perhaps I will someday meet a soul mate with whom I can partner as a non-dependent co-worker in service to humanity and Gaia, for it is now only for a higher purpose would I unite with another. No other purpose would serve. 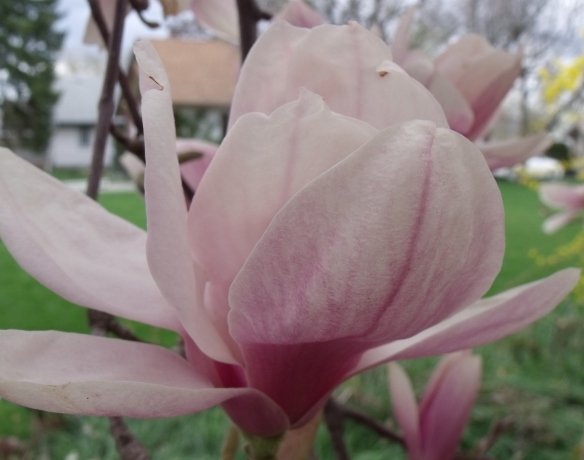 My path is slowly leading me towards service in a more full-time manner, but not just yet; there is still a ways to go. And whatever direction YOUR path takes you, learn to celebrate the steps taken, even those that appear to be setbacks for all experience is worthy and is being recorded in the Book of Life.

Spring bursts forth with a vitality unparalleled by any other time of the year. I love to see how much more advanced the unfurling of leaves and flowers is going as the sun and air temperature increases. And sometime soon, I will regain enough strength to take to the hills and explore the paths less traveled.